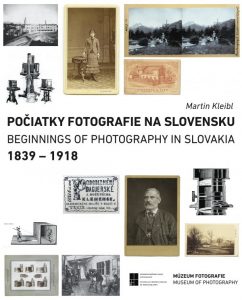 Since 1989, when Ľudovít Hlaváč’s iconic book The History of Slovak Photography was published, no other publication that would integrate new information or correct inaccurate facts about the history of Slovak photography from the second half of the 19th century and the beginnings of the 20th century emerged. And this remains true despite the fact that since Ľudovít Hlaváč’s times, the possibilities of acquiring information have significantly changed and are now much simpler – we have modern technologies and online databases at hand, we are able to communicate faster and exchange information in spite of distances and geographical boundaries. However, this period of history of photography is still not given the attention it deserves.

The book that you are currently holding endeavours to make amends for this mistake, even though it does not aim to present complete and definitive interpretation of the development of the history of photography in this era – because the subjects still hides numerous unexplored territories. This publication should serve as a stepping stone that provides all basic information on the historical context of the origin and development of photography in the world and in Slovakia. It acquaints readers with the historical photographic processes and techniques and introduces various significant figures that fundamentally influenced the development of photography in our region. The book should thus become a basic source of information for a broad audience, as it – through captivating form and a rich picture section – aims to awake interest in the not very well known and unpopular period of the history of photography. (And since the book is both in Slovak and in English, it aims to address international audience as well).

Even though it may seem as if nothing significant in the field of photography took place in our country due to its small size and a somewhat cultural ‘marginality’, the opposite is true. The figure of Jozef Maximilián Petzval, who fundamentally influenced the development of photography on a worldwide scale, serves as evidence. Numerous personalities of Slovak photography exceeded the borders of our region and were able to qualitatively measure up to renowned photographers of the surrounding countries.

Photographers as Imrich Emanuel Roth, Karol Divald, Eduard Kozics or Pavol Socháň and many more gave as a richness of beautiful images that make up an important part of our cultural heritage and simultaneously serve as a unique record of the times in which they were created.