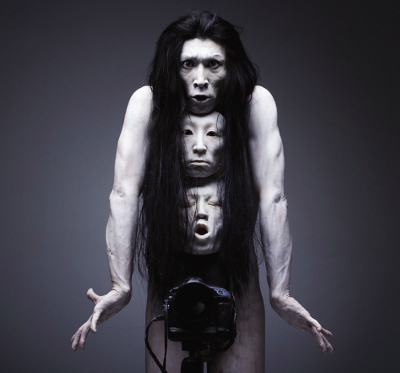 I brought a key (the camera), opened the door to the secret passage (the mirror), woke up my mythical archetypes, and lured them out into the world. I looked into the mirror, photographed myself, and created new images through my imagination. In other words, the mirror became the space where I am both the director and the actor on stage. Looking into the mirror, dancing, and at the same time photographing myself, daydreaming started to transform my talent into magic, which allowed infinite metamorphoses. All that was important at this point was their ‘relationship’ as well as not losing the link between ‘my present self’ and the ‘mirror-reflected me,’ or not desiring the position of the subject but giving up the self in the midst of relationship. Then I started to meet my third self. ‘I’ became expanded into ‘I’s,’ ever more numerous, and then I went someplace that I will call the “imaginative realm.”

Shown so far, fragmented self-images — which also can be numerous Others — maintain the relationship of looking at one another through the camera and the mirror even though they might seem scattered. Such a relationship has a certain order and structure. So, I am calling my work method “image-telling”—a new genre. It is separate from and embraces “storytelling” at the same time. I believe that “image-telling” can go beyond storytelling, which is based upon linguistic imagination.

Image-telling is the same as presenting spectators with the tools for imagination, something close to a new musical instrument, instead of already completed music or a story. Therefore, there can be no fixed story in image-telling. It provides an opportunity for daydreaming and opens the door to the imagination. For that reason, for the title of my work, I decided to use the word “variation”, which is an important characteristic of the image-telling. After about 99 images, I will walk back along the road that I have traveled up to this point and rethink the power of the imagination, the meaning of the images, and their relationship to myself.

Youngho Kang was born in 1970, Seoul, Korea. Lives and works in Seoul. He is a president of Creative Company SangSang Variations & SangSang Art Museum. He holds B.A. degree in French Language and Literature, Hongik University, Seoul (1995). He has held many solo and group exhibintions since 2009. Was awarded by several prizes, for example Korea Fashion Photographer of the Year (2011). He is also Honorary Ambassador of Child Fund Korea (2012), Creative Director of Fissler Korea Advertisement (2007 – 2013).