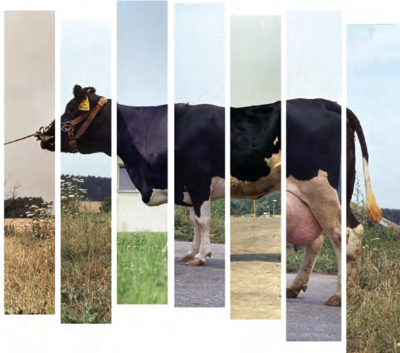 This found archive of photographs from Agrokombinat Slušovice bears witness to a unique agricultural phenomenon in the 1970s and 1980s as well as then contemporary advertising photography. The exhibition features several artworks that enrich these historical photographic ads with new layers of meaning. For certain generations, the word ‘Slušovice’ had a similar ring to words such as bompary, Favorit, Remoska, Merkur building set, Pionýr motocycle, botasky or Wartburg.

I was born in the 1970s, not too far off from Slušovice. On Saturdays, people would drive there to do their groceries, watch horse races or eat at a restaurant built in an airplane. My parents never took me to Slušovice, but it must have been absolutely singular. Adults spoke of the place with such energy that I eventually began associating it with the miracle planet from Soviet children’s books about Neznaika. In the 1970s, the complex united agricultural cooperatives from the mountainside villages on the border of Moravia and Slovakia under the heading of Agrokombinat Slušovice. Inspired by the example of Tomáš and Jan Antonín Baťa from nearby Zlín, the guidance of Fratišek Čuba allowed it to form compact innovative teams, produce goods that were short in stock, trade profusely with the West and  simultaneously be the prime example of Czechoslovak socialist agriculture. They exported calves, syrup extracts and fertilizer, all at scale. In exchange, they allowed the state to bring in much-sought foreign currency and components used in constructing the earliest computers. Its employees had good salaries, they would go shopping at Kvatro, a Tuzex-like chain specific to Slušovice, they opened savings accounts in their own bank and several kilometres of highway built with the cooperative’s funds led from Slušovice to Zlín. Slušovice became synonymous with economic success in the curious conditions of a socialist economy, but also for questionable forms of enterprise in the early 1990s. Roland Barthes wrote that the miracle of photography does not merely lie in its ability to copy reality but above all in the fact that it emanates a reality that no longer exists. The power of authenticity trumps the power of the presentation. Photographs are a sort of canned time – fragments of the past absurdly stranded in the present, unless we find them an appropriate context. At first, I tried to utilize my experience and methodology as an art historian and reconstruct the slide projectors for which these diapositives were originally intended. But the presentation scripts have only been preserved in a very piecemeal form. Instead, I began working freely with these photographs and created new contexts for them. The images themselves evoke an irresistible nostalgia, which is why I also try to uncover various historical advertising strategies. Merely providing a new context does not overpower what the photographs portray but instead enables a second reading: we can follow the various systems of depiction and advertising strategies that were used in their creation. The photographs contain copious references to the age and the strategies of then contemporary advertising: medium-format negatives, spectacular filters, mannequins from next doors, curious arrangement techniques. They were produced in 1978–1989 by Jan Regal, an advertising photographer from Zlín. The photographs are supplemented by other works created in present-day Slušovice, in continuity with this archive.