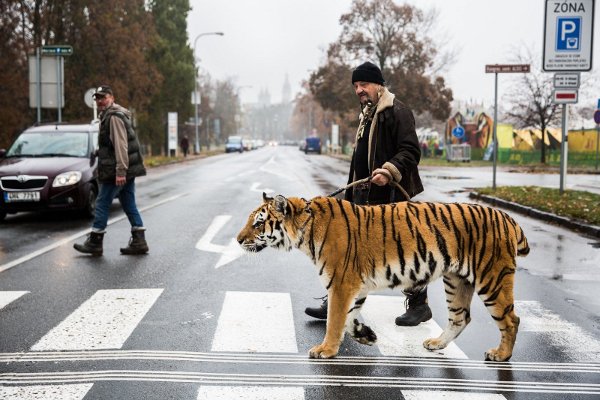 David Těšínský is a member of the youngest generation of Czech photographers. He had already started taking photographs during high school. He has won the Czech Press Photo Award several times for his work, and his photographs have been published in The Sun and le Monde. His reportage captures the stories of people from all over the world. We see them in their everyday life, often in harsh conditions, or even in war. Their boundary emotions are underlined by dazzling colours.

This exhibition will introduce a collection of thirty photographs from Těšínský’s various reportages from home and abroad. Each one of them is a strong story, a strong emotion and a harsh statement about the world.

David Těšínský: “WHAT and HOW is a key term for me. Controversial creative.”

For over 10 years I have been photographing people and subcultures, in some way special for me, sometimes even with controversial lifestyles or destinies. Mostly in Asia, America, Europe and Africa.
Through photography I express that photography is both a cure and a powerful weapon. It can open people’s eyes and it can also please or make them laugh. It works like medicine.
I would call this exhibition consisting of several thematic sets “A PHOTOGRAPH AS A WEAPON, A PHOTOGRAPH AS A MEDICINE”.

War is not over yet

This series captures female soldiers in the Donbass War Zone (the Donetsk and Luhansk regions) who are fighting Russian aggression and depicts their everyday lives. One of the main heroines is Julia (22) from Russia, who joined the Ukrainian side.

This is a satirical photo series (from 2012 to today) which kills stereotypes, makes you think or open your eyes, or just makes you laugh. Some scenes are based on happenings. In cooperation with volunteers. EU, USA, Ukraine, Ethiopia

Rap is our religion

This series captures the idea that rap is not just a music style but is a way of living, a way of breathing, it is a faith. It captures the lives of American rappers in cities like Detroit, NY Brooklyn and the Bronx and in Baltimore.

Photographs from the life of the living legends of Jamaican reggae and also the life of Rastafarians.