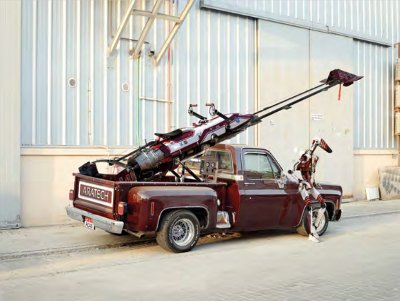 It all began over 14 years ago with Dark Lens, Delsaux’s initial series combining everyday places with the universe of Star Wars. After taking a break, Cédric Delsaux now reawakens the fantasy with this new opus, irreversibly breaking down the boundaries between Reality and Fiction… While the vehicles and characters of the famous Star Wars saga still haunt the real-world places he shoots – like Paris, Dubai, Marseilles, and Abu Dhabi –, this time Delsaux has worked with a full team (designer, 3D graphic artists, retouchers) to further tear back the veil between true and false, to the point that we begin to wonder if even the slightest frontier still remains. What was originally a simple confrontation between Reality and Science Fiction is finished; now the World and the “Dark Corporation” become one. It is as if the characters of the series have now permanently settled on Earth, bringing with them their ancient powers. These new residents have acquired their own vehicles, which are inspired by the Hollywood saga but recreated in the style of earthlings, borrowing design and techniques from the world that came before, the one that belonged to humankind… With this approach Cédric Delsaux combines two opposing states, reality and fantasy, as if to suggest that one can no longer be perceived without the other. The present of his  photographs is no longer in the indicative, but is modified using some unknown conjugation to produce a sort of present of the conditional, distorting Roland Barthes’s formula “this has been” into a puzzling “and if this was”. Delsaux also uses his sets to suggest a looming, insidious threat. Each piece of land he captures depicts the latent conflict between human beings and the technology they have created… And he has an original way of exploiting the modern myth that is Star Wars to summon up all the anxieties and ambitions of a generation abandoned at the edge of the gaping chasm left by the disappearance of the Grand Narratives.