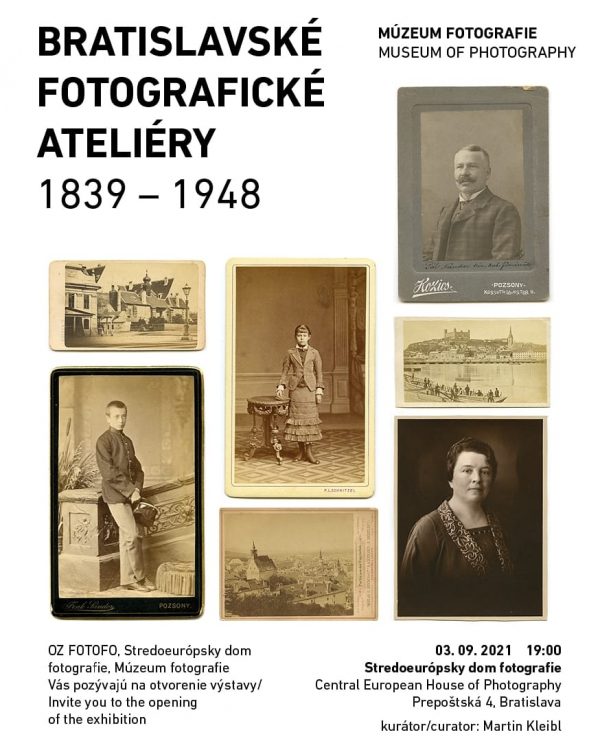 Photography entered the history of civilization in 1839 and has radically changed the world since then. Today, we no longer even realize the complex and long development of photography, and today we can no longer imagine life without it.

Bratislava, even though it was still a relatively small “provincial” city in the second half of the 19th century, in terms of the number and quality of photographic studios, it was at a level comparable to the neighboring metropolises of the monarchy – Vienna and Budapest.

Between 1850 and 1948, more than 60 professional photographers took turns here, and each of them left traces, some smaller, some larger.

Photo studios naturally originated in the place of the greatest movement of people, in the city center. In Bratislava, it was mainly today’s Hviezdoslav Square (period name Promenade), Obchodná Street, SNP Square, Panská or Dunajská Street. Photographic workplaces took various forms – from simple extensions in the courtyards of houses, which consisted of a studio with daylight and a photo chamber, up to separate houses specially built for this purpose. Depending on their commercial success, some photographers changed jobs or set up other branches several times during their careers. The competition was huge and only the most skillful were able to improve their services, to invest in the latest technologies, advertising and set up complex workplaces that were able to attract as many customers as possible constantly. It is remarkable how many photographers were able to make a living in the relatively small Pressburg. The clientele of the most sophisticated photographers consisted of rich merchants, officials, important burghers, but also military dignitaries.

The exhibition presents examples of individual genres offered by photographers and their studios and clearly demonstrates the development that studio photography has undergone in almost 100 years. Part of the exhibition is a map that shows the places where the individual facilities were located in Bratislava, presents the work of the most important authors and offers to those interested in walking around places which still remind of the glory of Bratislava photo studios. Photography in Bratislava has an extremely rich history and has been an important part of the city’s development since the second half of the 19th century. It has significantly affected its cultural and social development and, last but not least, today, it brings us a unique testimony to the appearance of the city and its inhabitants.